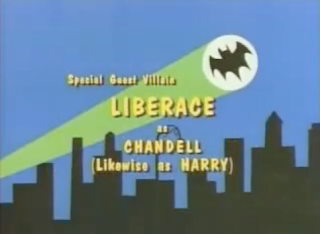 Season 2 Episodes 49 & 50
Original Air Dates: 10/26/66 & 10/27/66
Special Guest Villain: Liberace as Chandell (Fingers) and Harry
Guest stars: Marilyn Hanold, Edy Williams
Written by: Lorenzo Semple, Jr.
Directed by: Larry Peerce
World-famous pianist Chandell is being blackmailed by his brother, Harry, who insists on being paid five million dollars or the world will know that his brother uses a player piano. Unable to cope with being the world's biggest fraud (until Milli Vanilli, that is), Chandell hatches a scheme to marry Harriet and off Bruce Wayne and his youthful ward (and Harriet's nephew) Dick Grayson to inherit the Wayne millions. Meanwhile, Batman and Robin have taken off on separate vacations. Will they get word of the dastardly plot before Harriet walks down the aisle? 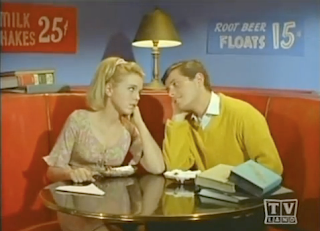 PE: So, let me get this straight (bear with me): Bruce is off muskrat hunting with his millionaire pals and doesn't have a radio to hear what's going on, in his absence, back in Gotham? No, that's not right because he's listening to Chandell's great finger work over the radio when he suddenly hears an errant C Minor chord in Danse Arab and knows that something's gone foul in Gotham. I'm with Bruce's "male companion" on this one, "I don't follow you, Bruce." Meanwhile, Dick, utterly clueless about any crime wave, is putting the moves on a sweetie in the ice cream parlor (he hasn't had these kind of thoughts in his head since he went undercover in a biker uniform several episodes ago) when he gets the word from Bruce. Subtly sweeping his date's ice cream into her lap (the closest he'd get to a girl's midsection, I hasten to add), Grayson answers the call and won't even admit that he's been asleep at the wheel while Batman takes a well-deserved shot at some muskrats. 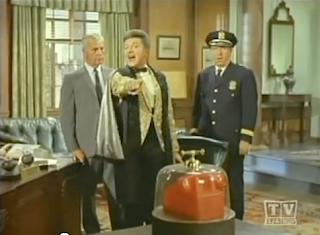 JS: I loved how Chandell cast a wayward finger in the direction of the Batphone when he insisted that the commissioner call in the dynamic duo to save the day. Somewhat surprising, considering he wouldn't have known they were on vacation.
PE: Biggest laugh of the season when Gordon gets word that Batman and Robin are on vacation (two minutes after hearing the news that Bruce and Dick are on vacation!) and looks at Chief O'Hara with terror in his eyes:

Gordon: You know what this means, don't you?
O'Hara: If you're thinkin' what I'm afraid you're thinkin'...
Gordon: Precisely, Chief O'Hara. The moment we've dreaded for years has arrived. This time... we're going to have to solve a case ourselves!

JS: And Chief O'Hara was clearly shaking in his boots as he realized he was going to finally have to go to work. 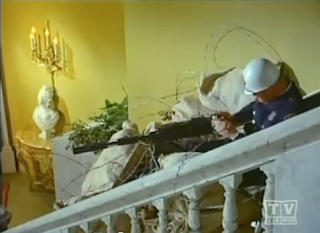 PE: Gordon fills the upper theater box seats with machine gunners and tells his men that, if and when the trouble starts, "to make every bullet count!"


JS: And note that it's not just an armed guard... it's a full blown machine gun nest with barb wire protection. Makes you wonder how they set up to target jaywalkers in Gotham when Batman takes a day off. 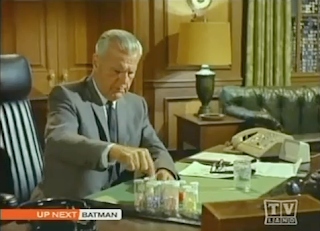 PE: Batman calls Gordon just in time, it seems, to tell him that he's back in Gotham. Gordon's about to take the easy way out.

JS: With the lineup of pill bottles, it begs the question—is Bonnie still on vacation?


PE: Batman seems astonished that Robin could hypothesize that there might be some funny business going on when Chandell is alone with Aunt Harriet. "Your Aunt Harriet," Batman scolds, "is utterly above reproach!"


JS: Yes, the Boy Wonder certainly touched a nerve. Do you think there's something going on between Bruce and 'Aunt' Harriet?
PE: Did I really hear Robin refer to Chandell as "The World's greatest penis?" 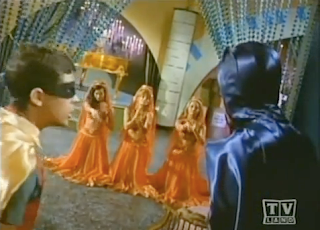 JS: He didn't say it, but yes, I'm sure you heard it. This episode had one of the more memorable choreographed fight sequences, with the three harem girls weaving in and out of the fisticuffs. Batman initially says that he can tell by the look in their eyes that the girls were victims of criminal hypnotism. One wonders if it was in fact their eyes he was looking at, as he later referred to them as, "poor, deluded females..." 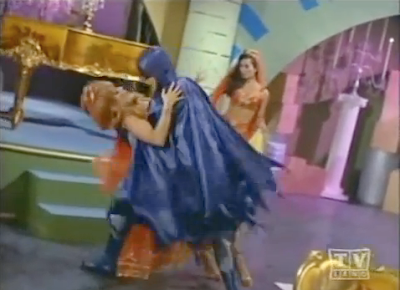 PE: Bats finds an ingenious way of evading death as a roll of music paper. I'm not one to sidestep genius but wouldn't it have been easier to roll themselves off the conveyor belt?


JS: While Batman tells Robin to match his notes precisely, their white boy scat is hardly what I would call harmonious.
PE: Judging by the "Subtle Interrogation Lighting," Alfred's been moonlighting making equipment signs at police headquarters. Meanwhile, the Batcave's a mess.


JS: How dare you! After Alfred went so far as to cover things up in the Batcave while the boys were on vacation. One wonders just how long they were planning to be away. 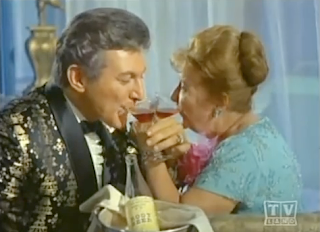 JS: To think, seducing the old broad with root beer. She hardly stood a chance. Although it's worth noting he did drive her to ask for a brandy later... 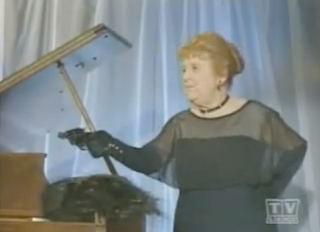 PE: WTF moment of the entire series so far: Harriet with a heater! Blow my mind completely and drill the SOB full of holes. She'll get two episodes in the slammer if that.


JS: Ma Parker certainly opened the doors for firearm violence on Batman. No more machine guns hidden in sarcophaguses! Ol' Lib got to put the capper on his Cagney impersonation by unloading a tommy gun on what he thought was the black widow and her butler.
PE: Chandell and his pals are obviously carted away to a different pokey than Catwoman, Riddler, and the rest of the boys. He's forced to wear prison stripes rather than his hoodlum gear. But at least they gave him a piano! 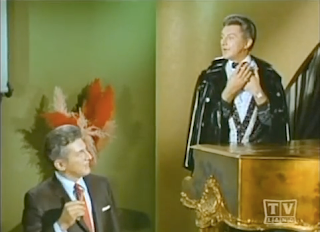 PE: Best episode of Season Two so far is the perfect meeting of Real Camp and Reel Camp. Liberace looks absolutely inspired playing both roles (actually, his only acting comes as tough guy twin brother Harry), and you can tell he was having a blast every minute he's onscreen.


JS: I too was quite surprised to have enjoyed this episode so much. There's something endearing about the way Liberace sells himself as a cigar-chomping man's man. 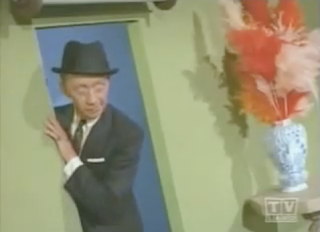 JS: Another performance worth noting was James Millhollin, who did a fantastic job as sleazy lawyer Alfred Slye.  Earlier in the year Millhollin appeared alongside Don Knotts in the classic The Ghost and Mr. Chicken. 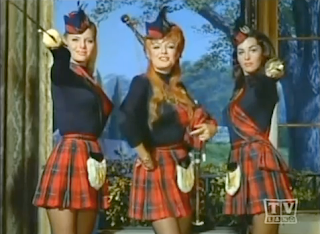 PE: Equally feminine are Chadell's three sirens, played by Batman-vet Edy Williams, Marilyn Hanold, and Sivi Aberg. Hanold is fondly remembered by genre fans for her roles in Frankenstein Meets the Space Monster and The Brain that Wouldn't Die.
JS: Edy gets a little more screen time here than she did in The Pink Sandbox. 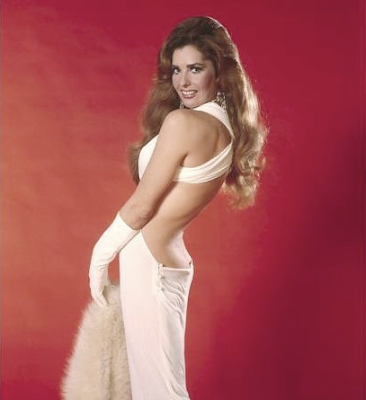 Next up... The Penguin! Same Bat Time, Same Bat URL!
Posted by Peter Enfantino at 6:00 AM