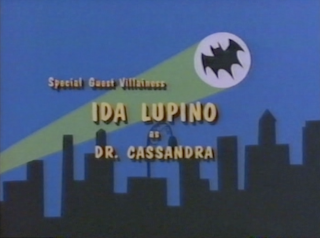 Dr. Cassandra Spellcraft (of the notorious Spellcraft family) has discovered a spell that can render her and her husband, Cabala, invisible. Their dastardly plans include releasing six arch-felons from the State Prison and raining hell down upon Gotham!

PE: I thought we were in for a good time when we find out that Gotham City Bank is "the bank so conservative that it pays no interest at all."

JS: Was that a nod to those viewers who had given up paying interest in the show?

PE: I could have gone on the rest of my life not having my view of Howard Duff as a real he-man destroyed. I remember Howard fondly from reruns of Felony Squad as a rough, gruff police sergeant who took no crap off perps. Here he's a skirt-chasing, earring-sporting, henpecked hippie dippie who spouts "Groovy" and "Marv," two words that, I'm sure had never emanated from his mouth before. Duff was married to Lupino at the time this episode was filmed but they had been separated for two years (they would finally divorce in 1984). You'd never be able to tell there was anything but marital bliss between the two on screen, if Duff's continual advances on Lupino are to be believed. Lupino, of course, was one of Hollywood's first respected female directors. You can read more about her on the Thriller-a-Day blog as she directed nine episodes, including the classic La Strega.

JS: He certainly threw himself into the role. I liked his line about husbands and wives are supposed to bump into one another once in awhile. I imagine a few parents did a double-take on that one.

PE: At least Barbara got herself a new raincoat. It's still matronly but at least it ain't slicker yellow. 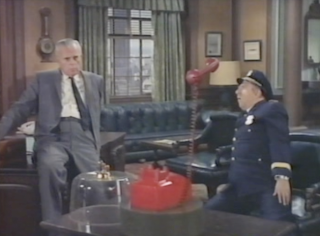 JS: Do you think they had exhausted the season's budget by this point? I can't imagine those 'invisible effects' cost as much as having to have actors present (then the question becomes 'did they actually have actors present?'-PE).

PE: The budget had hit such a low that Cassandra wasn't even afforded henchmen. That's a first. And Cassandra is forced to deal with The Terrific Trio with a bare bones weapon: a colored flashlight. They could have at least sprung for a Christmas tree color wheel. Ouch! I'll bet Lupino was wishing she'd gotten in when the gettin' was good.

JS: One prop they didn't skimp on was the mini-Batphone! It's not Bat-creeper, but a cool gadget right out of the utility belt. 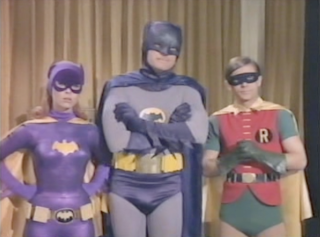 PE: I got half of my LOL-Adam West for the episode when he asked if a gun wasn't below Dr. Cassandra's level and finished it off with a deliciously slow "Noooo.... style!" Only problem is that our veteran director, Sam Strangis, must have been nodding off as he only catches West mouthing the "Noooo..." before we cut to Cassandra and Cabala. Mr. Strangis, you had "noooo.... style!" If I was a TV producer, I would have signed up West for a comedy show when the Batman run was over.

JS: I enjoyed the flattening sequence, right down to the vibrating Batgirl. But I had a problem with them being mailed to Alfred. Pete, you're a postman. Do you think they knew the address of the Batcave? And if you're sending flattened bodies through the mail, wouldn't there be some forms to fill out? To whom would Gordon send them, and did Alfred have the appropriate fake ID to sign for them (Forget it, John, it's Gothamtown-PE)? 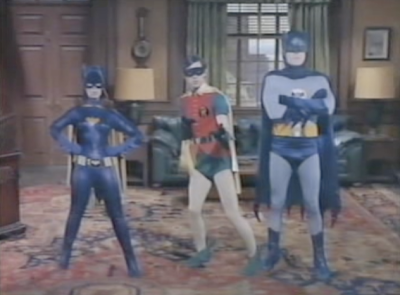 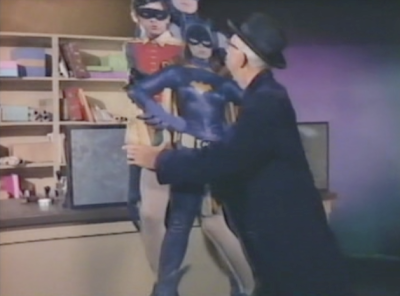 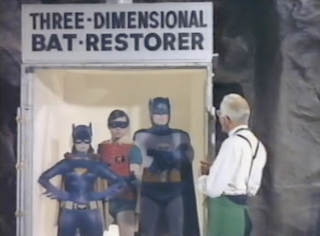 PE: It's certainly lucky Bats had that Three-Dimensional Bat-Restorer on hand in the Bat-cave or the series may have ended on its 119th episode.

JS: Once again the dynamic duo demonstrates the value of proactivity. Who else would create a Three-Dimensional Bat-Restorer before they had ever been flattened. Of course, they might have chosen to invest that time and money into the anti-flattening pill... but at least they had that ready for their next go-round. 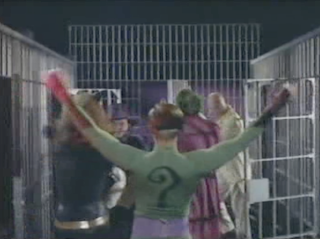 PE: By this time, Dozier was too cheap to bring in the old villains for the cameos at the prison escape but I thought the powers-that-be did a good job of finding extras who at least resembled the arch-criminals for that couple of seconds we see them all. For the record, those present and accounted for are Egghead, the Joker, King Tut, The Riddler, Penguin, and Catwoman. I wonder if Frank Gorshin was paid any royalties for the use of his laugh or Burgess Meredith his whack-whack (yeah, right!).

JS: I was impressed enough to stop and re-watch that sequence. Now I knew there was no way they'd pay to bring out the big guns for cameos, but I can imagine being a kid watching this and believing that all my favorites were present and accounted for.

PE: I had to chuckle when I noticed during the climactic invisible battle, most of the crap was being thrown at Burt Ward. Even into Season 3, he had a lot of friends in the crew. And that fight in the dark is pure genius. Twenty more bucks saved on lighting! Score!

JS: I disagree with you there. I thought it was brilliant to have them beaten down by 'invisible' villains, but the lights going out took that fun away. 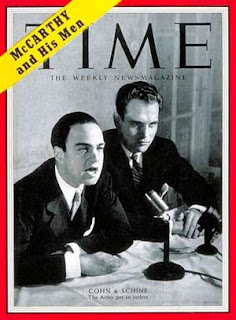 PE: Our "celebrity" cameo is from G. David Schine, who had quite a colorful past. He was one of Joe McCarthy's main goons in the 1950s (and made the cover of TIME Magazine as such), dated Piper Laurie, was accused of having a homosexual relationship with fellow McCarthy goon Roy Cohn (not that there's anything wrong with that), and discovered Osmond Brothers knock-off The DeFranco Family (who were dorky enough to have guest starred on Batman if the show had lasted another ten years). He's very clearly a terrible actor so this was a series on which he could shine.

JS: It's also worth mentioning that after 119 episodes, O'Hara realized that there was a voice at the other end of the Batphone. Way to go, Chief!

PE: Out of context LOL-line of the show:

Cabala: Beat it, baby! We'll flail it together!

JS: For a first-time villain in the final episodes of the series, this could have been far worse. We'll see how we do with Zsa Zsa. 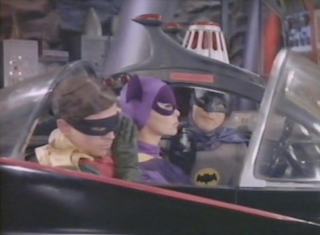 PE: Let me leave you with a bit of dialogue. Bats has just sprayed Batbabe with Bat-go-to-sleep-spray so she won't be able to identify where the Bat-cave is.

Robin: You know something, Batman?
Batman: What's that, Robin?
Robin: She looks very pretty when she's asleep.
Batman (with a big grin): I thought you might eventually notice that. That single statement indicates to me... the first oncoming thrust of manhood, old chum!

And they say this show was for kids?

Next up... The End is truly here, with Minerva! Same Bat time, same Bat URL! 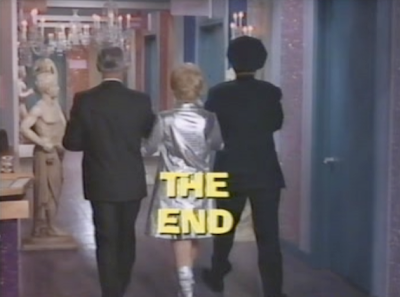 Posted by Peter Enfantino at 6:00 AM